Screening of “The Hunting Ground”

TELL and IamJane are co-hosting a free screening of the documentary “The Hunting Ground.” This powerful, award-winning film documents the personal stories of students who have been sexually assaulted on American university campuses. It follows survivors who attempt to pursue both their education and justice in the face of institutional failures to effectively respond to their reports.

The documentary confronts the reality of sexual assault and explores the impact of violence on survivors. It has helped to raise awareness of the meaning of “consent,” the process of reporting crime, and also the laws surrounding sexual assault on campus.

This special screening will be followed by a panel discussion highlighting the issues relevant to Japan from a wide range of perspectives, including legal issues, reporting, accessing services, and support for foreigners in Japan. 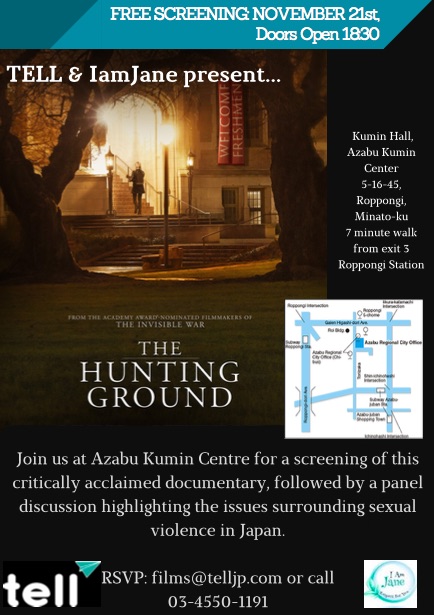 This entry was posted in Outside Events and tagged film, gender, NPO, sexual assault, social issues. Bookmark the permalink.