Members of Black Stripe Theater company performed a spirited and riveting adaptation of William Shakespeare’s ‘Macbeth’ on December 5th. The audience stayed on the edge of their seats from beginning to end and not a single student was dozing. After the play, the actors graciously remained for a lively Q & A.

Remarkably, the Black Stripe Theater company is simultaneously performing “A Christmas Carol,” “The Hound of the Baskervilles,” and “Macbeth” at venues around Tokyo.

Find out the latest about IE Program activities and special events by following us on Instagram. 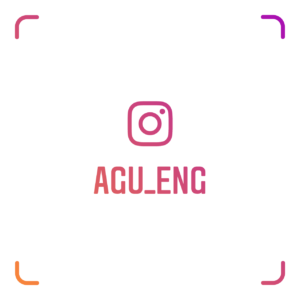 Posted in Events at AGU, Learning Resources for Students | Leave a comment

Members of Black Stripe Theater will perform an adaptation of William Shakespeare’s tragedy ‘Macbeth’, a story of ambition, murder, madness, and the supernatural. The play is set in 11th-Century Scotland. After some successes in battle, the great warrior ‘Macbeth,’ is given a prophecy by three witches that he will someday become king. His ambitious wife urges him to speed up the process by killing King Duncan and seizing the crown for himself. Events do not transpire as smoothly and happily as the couple imagines as Macbeth is forced to commit more and more murders to protect himself. He soon becomes a dictator and forces Scotland into civil war. He and Lady Macbeth are then plunged into madness and untimely death.

EVENT: Dramatization of the play “Macbeth”
WHEN: December 5th (Thursday); 3rd period 13:20~14:50 AND an additional performance at 4th period 15:05~16:35
WHERE: Room 17309 — Building 17 on the 3rd Floor at 3rd period and Honda Auditorium 本多記念館 (17-610) at 4th period
LANGUAGE: English
TARGET AUDIENCE: IE students and any other interested parties who love live theater

Read the entire play online in the English of Shakespeare’s day at: http://shakespeare.mit.edu/macbeth/full.html.

Or, read the play in modern translation at “No Sweat Shakespeare”:
https://www.nosweatshakespeare.com/shakespeares-plays/modern-macbeth/act-1-scene-2/.

Topic: A new play “From the Inland Sea”

Ms. Linda Ohama is an award-winning Japanese Canadian filmmaker who produced and directed the film Obachan’s Garden (http://culturevulture.net/film/obachans-garden/) and the documentary film “Tohoku no Shingetsu” (“New Moon Over Tohoku”), which concerns the experiences of people in Tohoku who were affected by the earthquake/ tsunami/ nuclear disaster of March 11, 2011 and its aftermath.

The speaker will talk about her recently performed play “From the Inland Sea,” and students will be asked to perform scenes from it that they practiced in class. She will put the play–which involved experiences of her Japanese Canadian grandfather during WWII–into context by giving some background history of the internment of North Americans of Japanese descent during the war.

To be even better prepared for the lecture, read the attached interview and review the script (Act 4 of the play) that teachers will use in class to prepare students for the lecture. Read up on the background of the play here, as well.

It would also be useful for students and teachers who plan to attend the lecture to do some background reading on the internment of Japanese by the Canadian government during the war. Read this concise and well-written entry “Japanese Canadian Internment: Prisoners in their own Country” at https://www.thecanadianencyclopedia.ca/en/article/japanese-internment-banished-and-beyond-tears-feature . 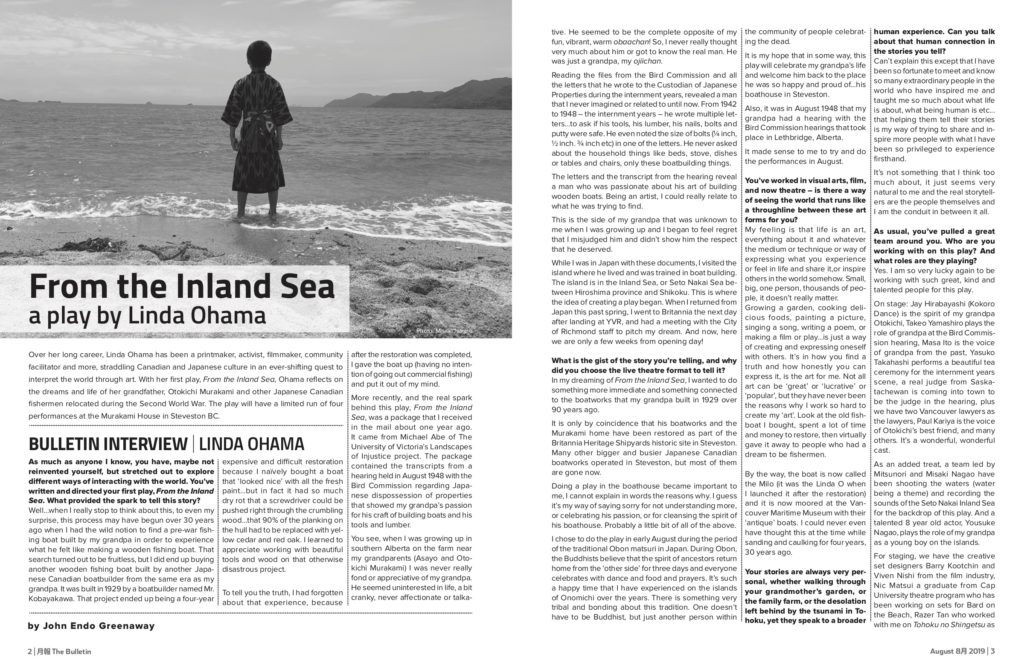 On three consecutive days, at the beginning of November each year, Meiji Jingu holds its “Autumn Grand Festival”–AKI NO SAI.” This event is held in celebration of Emperor Meiji’s birthday and in honor of various deities. You can see traditional dances given as offerings for gods, Noh performances, and an amazing variety of martial art demonstrations. You can even see Yabusame (archery on horseback).

Unlike our usual plenary talks for IE Program students and outside guests, this one will feature three speakers who represent organizations and causes connected with climate change. The main speaker is a 22-year-old climate change activist from the Philippines, Marinel Ubaldo, who is a survivor of Super-typhoon Haiyan. This typhoon struck the Visayas group of islands, home to 17 million people, in 2013 (when Marinel was still a teenager). It was the most powerful storm in 2013 and one of the most devastating typhoons of all time.

As we all know, climate change (particularly global warming) plays a huge role in the frequency and potency of extreme weather events such as Category 5 typhoons and hurricanes. This fact led Marinel Ubaldo to take action and become a climate change warrior. She will speak about what motivated her activism, what actions she has taken, and what you can do to help save the world.

The other speakers will represent “350 Japan,” an international grassroots movement working to end the age of fossil fuels and build a world of community-led renewable energy, and “Vegan Tokyo,” a group whose mission it is to support the Japan vegan community to grow and, connect to the worldwide vegan movement, and help make people aware of the connection between dietary choices and the environment.

EVENT: Climate Action Now: Symposium about what we can do to save the world
WHEN: October 10, 2019 (Thursday), 13:20 PM ~ 14:50 (3rd period)
WHERE: Aoyama Gakuin University; Aoyama Campus; Room 940 (4th floor of Building 9) Click here.
LANGUAGE: English
TARGET AUDIENCE: Anyone interested in climate justice and wishing to make a positive impact on the world.

Marinel Ubaldo, from the Philippines, was one of five young activists who attended COP21, the UN climate change conference in Paris, when she was just 18 years old. She campaigns on the issue of climate change and has been raising awareness across her community and around the world since she was a teenager, like Greta Thunberg. She testified at an investigation in New York about corporate responsibility for climate change and human rights abuses, and she conducts seminars for communities and students on environmental issues, climate change and climate justice.

Marinel is currently in Tokyo for the Climate Reality Leadership Corps training offered by former Vice President Al Gore, who is now in Japan as well conducting this training event. It equips people of all ages and livelihoods with the knowledge and ability to become more effective climate change activists. She helped to organize the Global Climate Strike on 20 September 2019.

Hinako Arao is a field organizer for an environmental NGO, 350.org Japan. She was born and raised in Japan, did her undergraduate studies and also spent her 20s working as an actress and a director in the United States and England. After returning to Japan, she has worked as a freelance film and TV producer. She enjoys working together with great groups of people to tackle the climate crisis.

Climate Change is the biggest threat that humanity has ever faced. And those who are leading the movements to solve the crisis are the young people from all over the world. Why? Because they are smart and strong, but also, they are the ones who will experience the consequences of this crisis the most. In her talk, Hinako will use Greta’s speech to learn about what is happening in the environment and the politics surrounding this issue.

If climate change was not on your radar before this year, the 16-year old Swedish activist, Greta Thunberg, may have put it there. She has galvanized the young and old alike to wake up and smell the oil (and the forest) burning. She spearheaded weekly climate strikes and started using the hashtag #FridaysForFuture, which have inspired many young people to strike in cities and towns around the world. On September 20, three days before the UN Climate Summit in New York, people—including thousands in Tokyo—marched, demanding that action be taken by governments, corporations, and citizens to drastically reduce the amount of green house gases being spewed into the atmosphere.

Access an excellent article written by Marinel Ubaldo which was published in the December issue of TeenVogue at https://www.teenvogue.com/story/cop21-climate-change-typhoon-haiyan-youth-activist.

Read the transcript of Greta Thunberg’s moving speech at the UN COP24 climate conference in Poland last year and see the video of it below:

Global Festa 2019 — Learning about the World

Something called “Global Festa Japan 2019” will be held on September 28th and 29th at the Odaiba Center Promenade in Tokyo. There will be films from the UNHCR WILL2LIVE 2019 / 映画祭2019, a charity run, “talk shows” concerning various environmental issues, photo exhibits, musical performances, among many interesting and enjoyable events. NGOs representing numerous causes and issues will gather there, so it is an excellent chance for students who wish to take part in internships with domestic or international NGOs to see what’s available. Who knows…you might become inspired to change the world!

This YouTube video will give you an idea of what a previous year’s Global Festa looked like:

Here are just a few of the NGOs that will have participated in the event in the past:

The UNHCR Refugee Film Festival has been rebranded this year as UNHCR WILL2LIVE Cinema 2019. Presently, 70.8 million people worldwide have been forced from their homes. The United Nations High Commissioner for Refugees (UNHCR) provides necessary assistance to these displaced people and tries to insure that no one is left without a safe haven.

The films shown this year will focus on the will of refugees to survive and overcome obstacles. It is important to realize that anyone may be faced with such difficulties without warning due to climate change disruptions, war, natural disasters, or civil unrest. Films featuring the unbroken spirit of refugees have been intentionally chosen for this year’s lineup. The festival will take place this year from September 21 to October 14, 2019 at venues in both Tokyo and Nagoya.

Three speakers–a professional surfer (Wako Dai); an organizer of the Yokonori Nippon Film Festival (Kenmochi Ryosuke), a festival featuring films that celebrate surfing, skateboarding, snowboarding; and a marine researcher (Kyo Masanori) will speak about their love of surfing, the oceans, and the importance of environmental awareness and activism. These talks will be in Japanese. 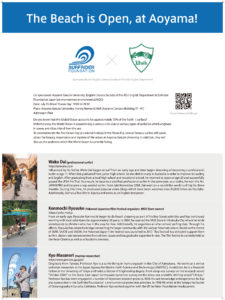 Professor Takatoshi Ito, will try to answer such important questions as “What is Japan’s place today amongst the leading global economies?” and “Will the Tokyo Olympics next year stimulate the economy?” and “What have we learned from Abenomics?” Through a conversation with Dr Sabine Becker-Thierry, the UNU Chief of Staff, the recent reforms that Japan’s economy has been undergoing will be evaluated and explored.

Takatoshi Ito is a Professor at the School of International and Public Affairs of Columbia University and Senior Professor at the National Graduate Institute for Policy Studies. He has taught in the United States and Japan since finishing his PhD in economics at Harvard University.